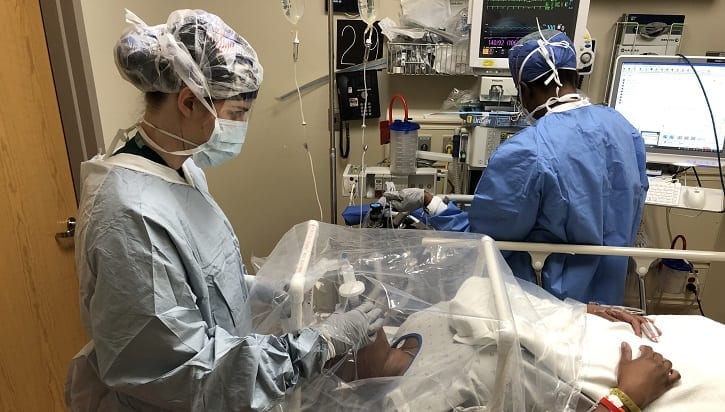 The COVID-19 Airway Management Isolation Chamber (CAMIC) device was created by the US Army and licensed to PrepTech, LLC, for commercialization. The device is an isolation chamber with a rigid internal skeleton and a clear, flexible plastic that drapes around the head, neck and shoulders of the patient. Unidirectional airflow provided by connection of external suction to an integrated suction port is designed to contain and remove aerosolized particles.

1. Has the CAMIC been reviewed by the FDA?

HERE is the link to the current FDA’s Emergency Use Authorization (EUA) for the CAMIC. This EUA is subject to change.

The CAMIC system is a barrier device constructed by draping a large clear plastic isolette over a box-like frame made of polyvinyl chloride (PVC) piping. The hollow PVC frame and clear plastic isolette is placed over the head, neck, and shoulders of the patient to isolate airborne particulates. The CAMIC provides continuous airflow through holes in the PVC frame. The CAMIC captures and removes particles emitted from a patient’s nose and mouth using a flow of medical air, which comes in through holes in the PVC frame on one side and is sucked out by a vacuum on the other. The CAMIC is authorized for use with hospital vacuum lines, as well as portable vacuum pumps with in-line High-Efficiency Particulate Air (HEPA) filters.

3. Does the CAMIC replace PPE’s?

No. The CAMIC is not intended to replace the need for PPE’s.

4. Does the CAMIC use Negative Pressure?

No. The CAMIC does not use negative pressure.

5. Does the CAMIC completely seal around the patient?

Prep Tech’s version of the CAMIC isolette (not part of the current CAMIC EUA) fits around the patient and is cinched with a small plastic ring which is included with the device. Some air flow will naturally occur around the patient using this method. The custom isolette has two integrated gloves. If needed, the device can be cut to allow further access into the device. These cut areas will create more air flow into the device. US Army studies show that these extra glove holes do not reduce the target effectiveness of the CAMIC device while proper suction is being used.

6. How do the integrated gloves work?

Prep Tech’s patent pending designs uniquely allow PPE gloved hands to be inserted into the two glove sleeves integrated into the CAMIC disposable isolette. This reduces PPE exposure to pathogens and minimizes spread from contaminated PPE to other areas.

7. How are pathogens removed with the CAMIC?

The CAMIC cycles out air through holes in the PVC frame. The CAMIC captures and removes particles emitted from a patient’s nose and mouth using a flow of medical air, which comes in through holes in the PVC frame on one side and is sucked out by a vacuum on the other. The CAMIC is authorized for use with hospital vacuum lines, as well as portable vacuum pumps with in-line High-Efficiency Particulate Air (HEPA) filters.

8. How many surgeries can the CAMIC frame be used?

Because of natural PVC degradation from standard hospital cleaning (see document Instructions for Healthcare Facilities Assembly, Disassembly and Sterilization of the CAMIC system), CAMIC frames should be used a maximum of five (5) times then discarded.

9. How do I get replacement isolettes for the CAMIC?

CAMIC isolettes can be ordered in bulk through this web site or from PrepTech distributors.

10. What are shipping options and product lead times?

We currently use Fed Ex and UPS for shipping. Expedited shipping options are available subject to product availability. We anticipate a high demand for these devices and are working diligently with our manufacturers to ramp up production during the COVID-19 Pandemic.

If units are purchased and devices are on back-order, Prep Tech will notify the purchaser with an estimated delivery date if longer than 4-6 weeks. If express shipment is requested at the time of purchase, units will still be sent with those requested options once devices are in stock. Please note however that items may NOT be received next day or two-days from the time of ordering.

11. Can anyone purchase the CAMIC?

The CAMIC is not authorized under this EUA for distribution to entities outside the Department of Defense.

12. Is the CAMIC available for purchase outside the US?

13. How can I become a reseller for Prep Tech devices?

Please contact us if you have direct connections in the medical community and can help us protect healthcare professionals.